New reconfigurable circuits for a wide range of applications

Electronic components that can process information with high levels of efficiency are crucial for the development of most contemporary devices and computational tools. Reconfigurable electronics, flexible systems that can change configurations to best utilize available hardware resources, are a possible solution for enhancing processing efficiency.

Researchers at Nanjing University and the National Institute for Materials Science in Japan have recently designed new reconfigurable circuits with advanced shape-morphing and information processing capabilities. These logic and neuromorphic circuits, presented in a paper published in Nature Electronics, were fabricated using 2-D tungsten diselenide, an inorganic compound commonly used in the development of electronics.

“Current mainstream reconfigurable circuits (such as the field programmable gate array, FPGA) are based on traditional silicon circuits, using P-type or N-type field effect transistors with ‘fixed’ electrical characteristics,” Feng Miao, the researcher who led the study, told TechXplore. “For example, PN junction is always reverse-biased, and varying the drain polarity does not add new switching functionalities. Thus, these reconfigurable circuits need to use a lot of transistor resources to build complex circuit structures and eventually realize reconfigurable computing capabilities at the circuit level.” 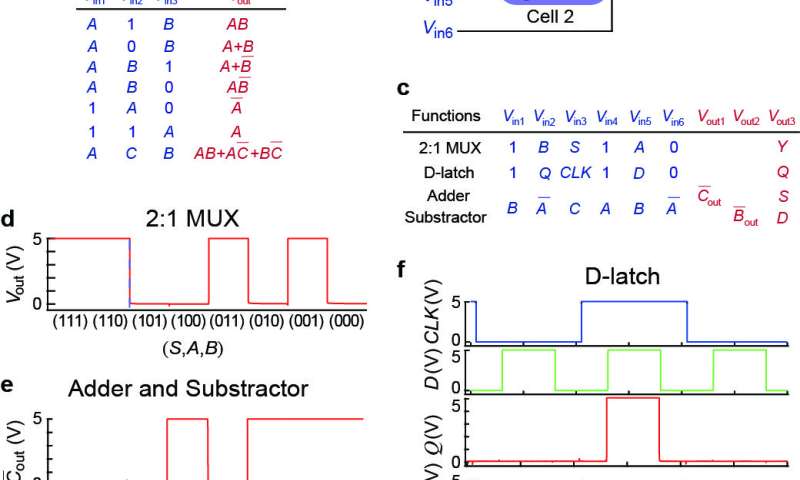 Feng Miao and his colleagues at Nanjing University have been developing electronics based on 2-D materials for over eight years. They have already created a variety of prototype devices that leverage the unique properties of these materials. In their recent study, they decided to use 2-D tungsten diselenide, as this compound exhibits bipolar transport behavior that cannot be observed in conventional silicon technology.

“To contribute to 2-D reconfigurable electronics, we designed a special type of homojunction (ETH) device structure and realized that the operation mode of such devices is reconfigurable via drain polarity control and different input combinations of the gate and drain voltages,” Shi-Jun Liang, another researcher in the same group co-led the study.

The new ETH device developed by Liang, Miao and their colleagues operates as a gate-tunable PN junction, with four different operation modes: NN, PP (always ON-states) and PN, NP (ON-OFF switching) modes. The researchers added an electronic feature known as drain polarity as a further control terminal, something that they never attempted in their previous works. The device’s four operation modes and its controllable drain polarity set it apart from other reconfigurable logic and volatile neuromorphic devices based on principles that resemble those behind conventional silicon technology.

“We proposed a novel technology (called ETH technology) based on a gate-tunable PN junction that is inaccessible by other devices,” Dr. Liang said. “The ETH technology enables us to drastically reduce the complex circuit design based on conventional silicon technology and shows promising applications in artificial intelligence, where ultra-high integration density and ultra-low power consumption are required.”

So far, Liang, Miao and their colleagues have merely developed a proof of concept for their reconfigurable neuromorphic circuits. The results they gathered in a series of initial evaluations suggest that their circuits could have a wide range of applications. For instance, they could be used to fabricate reconfigurable electronics that can execute sophisticated computations, such as those performed by machine learning algorithms.